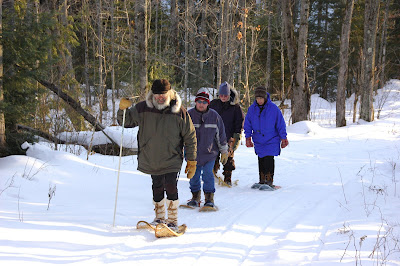 When folks from deer camp get together the talk usually turns to deer at some point. GurneyGranny, noted wolf tracking muckety-muck, managed to acquire the 2008 deer season synopsis from an unnamed source. In a nutshell, license sales were steady, it was the third safest season on record, and the harvest was down 30% in our area. The biggest complaint that wardens got was that the DNR had inflated the deer numbers to sell more licenses and that the reason the harvest was down was predation by wolves & bears, too much baiting, Earn-a-buck rules, and hard winters.

The harvest was down on Reefer Creek but not because of lack of deer. We captured many large bucks and countless antlerless deer on the game cameras, all feeding at night. I think perhaps too much bar stool time and smarter deer might be the main reason for the fall off in the harvest. Our group hunted hard but the lateness of the season this year meant that the rut was pretty much over and the only truly reliable way to get a really large, smart, old buck is when his judgment is clouded by thoughts of voluptuous and seductive does. The one thing that points to lots and lots of deer is the sign (tracks,, beds, and droppings) and the beating that they have been giving the vegetation in the area.

We took a nice snowshoe on Friday into a ravine and gully laced creek bottom area south of the Pod & GG acreage. 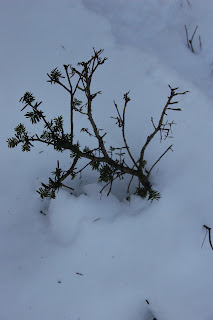 Typically in an area like this white cedar would be present and there are some larger trees. Canadian yew should be down there as well but almost all of it, along with the young cedar, has been browsed down to nothing (photo left). In fact the neighbor to the south, a biology and natural resources prof at Northland College, has fenced off some areas of Canadian yew just to see how badly the deer are browsing it. I think I know the answer: no young white cedar or Canadian Yew can grow with the population of long legged white tailed rats at its current level. Click on the photo below and the browse line is clearly visible on the shoreline cedar trees at LakeO.

This line is at the level of a deers mouth while its standing on the ice. Nothing grows below that level and there is certainly no new cedar growth on the ground. That goes for White Pine as well. The White Pine planted on our land is protected with little mesh cages to keep the deer from eating the 'candle' (new growth shoot).

Once again the 'balance of nature' is no balance at all. The deer hunting lobby is powerful in the state and would like enough deer so the average guy can hunt (if you want to call it hunting) for 4 hours on opening day and 2 hours on Sunday and be certain of getting their deer with a minimum of effort. Fewer people are actually hunting the entire nine days of the season. Many people would like to see the large predators help control the population but that has its own set of problems; once a few sheep get eaten or (god forbid) Fluffy the cat, then the predators are quickly culled. I'd sure like to see that creek bottom covered in cedar and yew but it isn't going to happen. If a person wants to visit a nice stand of yew they will need to kayak to some of the outer Apostle Islands. Out there the winter takes care of any overpopulation of deer and there are stands that are chest high, beautiful to view but impossible to navigate through on foot. I certainly hope that some sort of 'balance' can be reached between over browsing and diversity of our forest species but I ain't holdin' my breath. Lets get out of camp, off the bar stool, and shoot some deer here people!
Posted by DaveO at 7:36 AM