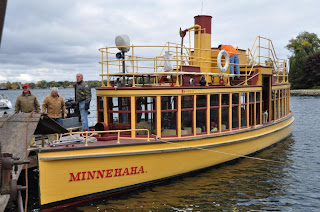 I was just informed by my sister and a couple other folks that I hadn't posted since 3 October and that I needed to get off my ass.  Had I been sitting on my ass I most likely would have cranked out a couple posts but that scourge of my many avocations, work, has kept me a bit busier than I would like.  I even missed Blog Action Day.  I had a great topic too, one that illustrated the 'Power of We' quite nicely.  It's never too late however, and the post about community effort and action is coincidentally about a  tour boat, as was my last post.  Instead of a brand spanking new state of the art boat like the Superior Queen in the prior post, this is about a tour boat that was launched in 1906. And scuttled and sunk in 1926.


Around the turn of the last century Minneapolis and St Paul had a really nice 'light rail' system, referred to as streetcars in those days.  People were moved around town as well as out of town and one of the prime destinations was the vacation and resort area of Lake Minnetonka about a dozen miles west of the cities. 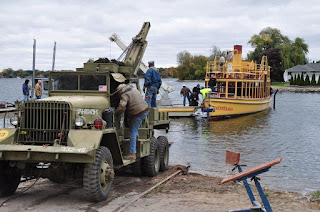 There were resorts, amusement parks, and hotels and the best way for the public to access them was by water. Thus a half dozen steam powered boats were built that  looked like the streetcars.  This plan worked great until Henry Ford made sure that everyone had a car.  Twenty years after they were built most of the boats were hauled out on to Lake Minnetonka, filled with ballast, and sunk in one of the deepest parts of the lake. 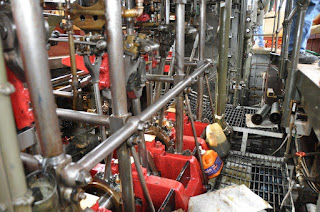 In 1980 a determined diver found one of the boats and it was raised from the bottom of the lake, its cypress hull in fairly decent shape after fifty plus years in the mud at the bottom.  An all volunteer corporation was formed and restoration began in 1990 with the first public cruise in 1996. Where we became involved was in the annual removal of the Minnehaha from the lake and into it's winter storage facility.  We were tipped off to this annual ritual by SkipperCharlie and BlueberryBets who lured us to Excelsior by sweetening the pot with a trip to the new Excelsior Brewing Compnay tap room after the boat was retrieved. 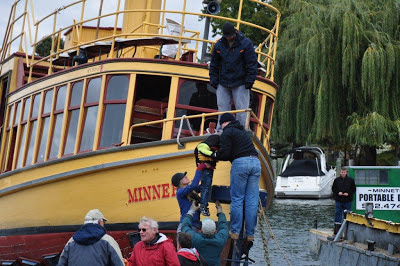 It was quite the exercise.  In an all volunteer organization there never seems to be a shortage of opinions and this was no exception.  The goal was to float the 55 ton boat onto a custom trailer and haul it overland to its storage facility about a quarter mile away.  This  would be done, in keeping with the vintage theme of the whole exercise, with what appeared to be a World War II era two and a half ton wrecker.  Winches anchored the wrecker to the Minnehaha on the back end and a large tracked crane on the front end.  The boat would be pulled carefully on to a homemade trailer and then slowly hauled up to the hanger style boathouse.  It seemed fairly straightforward but then the best laid plans of mice and men......... 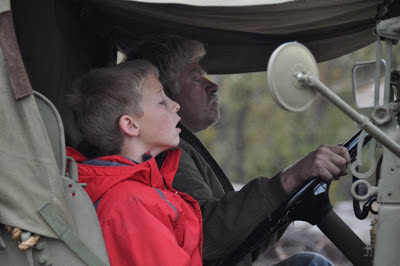 After much yelling, pushing, and adjusting the Minnehaha was finally on the trailer and the extraction process began.  What became apparent as the boat came out of the water was that it was a bit skewed on the trailer and it was also running up the ramp a bit too much to one side.  It was then backed back down, refloated, and the process was repeated.  This time the trailer with its 55 ton load became stuck in the lake and the long tongue was bent and a couple axles on the trailer were badly bent as well.  This forced the volunteer group to stop, get the gear fixed, and live to fight another day. 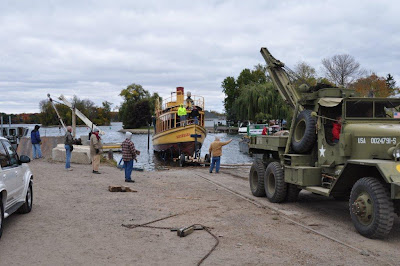 The Power of We in this case has not only raised the boat from the bottom of the lake, but also restored it, maintained it, operated it for the enjoyment of the public, and hauled it in and out of storage every fall and spring since 1996. Once the initial excitement of finding the boat was over, momentum needed to be maintained for restoration, operation, and maintenance.  That has been done and lots of people have enjoyed tooling around the lake in a piece of living history. It was great to experience the camaraderie, mild anarchy, and the obvious community support involved in extracting the Minnehaha. 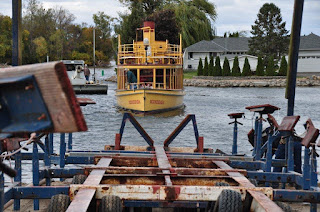 The only blot on the morning's activity was some jerk in a high end black 4WD vehicle, some said the owner of the land, marina, dredge operation, or some such thing, that at least twice came screaming up in his luxury ride and got out to yell at the volunteers for egregious crimes like standing in the wrong place, parking to close to the water, etc.  I guess, as my grandpa pointed out, there are just a lot more horses asses than there are horses.  The people doing the work seemed to take it in stride, which is the mark of a good group of volunteers, the ability to move forward in the face of criticism and naysayers.

Ending the day with some cask ale and pumpkin balancing at the Excelsior Brewing Co. was just the icing on the cake. It was great to see the old boat, check out the exposed workings of the steam engine, and take in the positive vibes of a great annual community event.  The Power of We at it's finest. 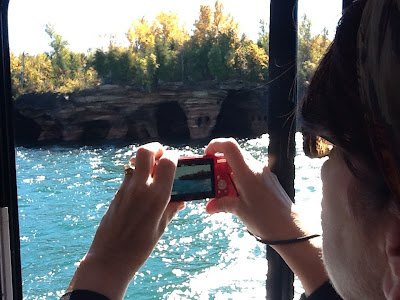 We got out on the big lake last weekend and hit about a half dozen islands in the Apostle chain.  It was the absolute peak of color in the Bayfield Peninsula (sorry Applefest fans.....), and the fall weather was sunny, crisp, and absolutely perfect.  Our collective butts were not sitting in the water however, but several feet off it in the Superior Queen, a tour boat just built and purchased this year by the Apostle Islands Cruise Service.  The reason said butts were not in the water is that TheLegend and GraciousPartier, parents of the VOR, were in town for a weekend of fall color, apples, and some R&R.  We thought about breaking out the double, the Lead Banana (Aleut II) but figured the tour just might cover a bit more ground than we could paddling. 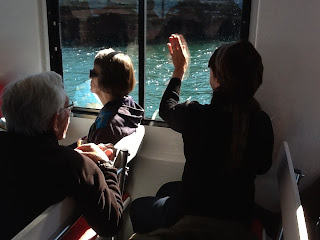 I had been on this tour before.  When the AINL was created  by the hard work of Senator Gaylord Nelson and a stroke of Tricky Dick's pen in 1970, the Old Man decided that we needed to head north and check this new park out.  My grandfather used to fish out of Cornucopia but the St Lawrence Seaway, also known as the sea lamprey/invasive species highway, pretty much put an end to that before I was old enough to tag along. This was my first real trip to the area.  As a sullen, uncommunicative, and preoccupied 16 year old, I had minimal interest in heading up there with my two younger sisters, but the terms of my indenture required my attendance.  I do vaguely recall it was kind of fun and that the islands and their sandstone outcroppings impressed me.  Little did I know....... 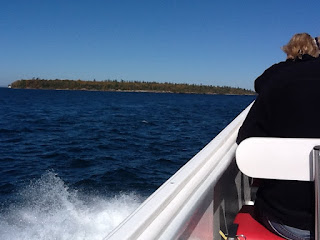 Saturdays trip was a nice change of pace. A person can see a lot more 15 feet off the water than sitting in it.  The VOR and I both remarked that it was like fast forward on a DVD.  Things moved a lot faster at 20mph than they do at 4mph.  TheLegend volunteers at a nursing home, where he actually 'outranks' a few of the residents and immediately realized that a tour of the Apostles would make a perfect topic for the Monday men's club gathering. Immediate research began. One of the aspects of the trip that we both enjoyed was seeing the islands through the perspective of people who had not been out there a hundred times.  Questions about the quarries on Hermit, the Manitou Fish Camp, and Devil's island caves and lighthouse, made us realize other views that people might have about the park that don't involve hammering a kayak into 15 knot winds to get to the next campsite.  The GP also remarked that after years of hearing about the various islands that we found ourselves on, it was fun to see them and appreciate just what we were talking about. 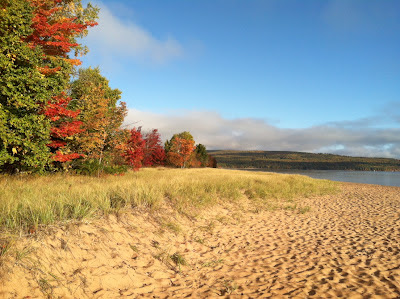 The tour was very good, well narrated, and absolutely worth the forty bucks.  I was more than a little amused when I read some of the comments, most of which were very positive, on the TripAdvisor website.  One only gave the tour three stars because it was' chilly and blustery out'.  On Lake Superior?  No shit??  One woman awarded one star and complained that she bought a coupon, drove 90 miles, and was told she needed a reservation.  On a cruise boat that holds 120 people, in a national lakeshore, during tourist season? Ya think!?  Another complained that the glass bottom boat didn't have a 'real' glass bottom, just two viewing wells, and furthermore the wrecks just were not very interesting.  I imagine she envisioned an entire glass hull as the boat cruised over wrecks of Spanish galleons, doubloons scattered on the bottom, with pirate cutlassess and skeletons littering the deck.  Oh wait, I guess we are on Lake Superior.  Our Saturday group of 'tourii' did not exhibit any of this sort of angst or cluelessness however.  It was an upbeat and jovial group and on a glorious fall weekend like the last one, a person would be hard pressed to find anything to complain about.

During this trip we did not see a single kayak, either at any of the campsites (believe me I checked with the binoculars) and we passed Basswood, Oak Spit, Manitou, Otter, Rocky Spit, York, and Devils. I don't think all the paddlers were on the boat ride with us but it felt like lots of paddlers missed the perfect fall weekend.  While I don't think the boat cruise will become an annual event, it was great to show the in-laws our little Lake Superior playground.  While I'm far too lazy to throw a comment up on TripAdvisor, I would have to give this cruise the maximum number of stars.  Its a wonderful three hour overview of the island, lighthouses, history, and natural beauty that make the AINL one of our favorite places. 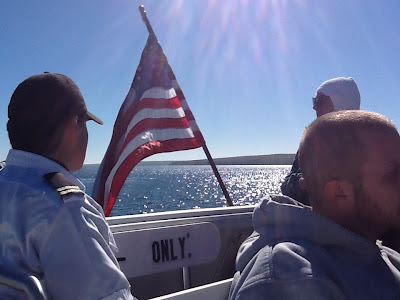