When I strolled into work yesterday it was -15F (-26C). For those of you in warmer climes, there are certain indicators that let you know its below zero without needed to check the weather report. The easiest one is the crinkly, crackling feeling of the nose hairs as you attempt to inhale the super frozen air. The sound of boots on the snow is not a normal crunch but more of a squeaky crunching, indicative of squashing a true solid material rather than frozen water. As we skiers know, this is no time to skate ski. Its like trying to glide on sandpaper and the traditional classical skis are the only way to fly in this kind of cold. My usual nod to the coldest day of the year involves strolling outside with a cup of hot coffee. When it is tossed into the air it instantly crystallizes into tiny brown snowflakes and flutters to the ground with not so much as a drop of liquid hitting the ground. Needless to say, there was no talk of skiing last night but then Tuesday is usually never a ski or kayak night but rather Hotdish Night at Grumpy's bar. With last nights hotdish we were also treated to an excellent performance by the St Mary's Balalaika Orchestra, a Russian treat that was very appropriate on a below zero evening. 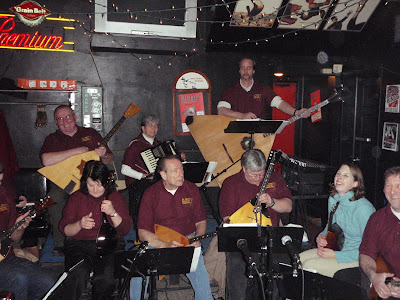 When RonO and I strolled in, soon to be joined by the BessemerConvivialist, on her way to some gourmet food-a-thon, we weren't sure just exactly what a Balalaika Orchestra really was. As musicians kept drifting in we realized that this was a real orchestra and not just 3 or 4 folks playing the triangular, three stringed instrument. When they finally got set up and began to play we were amazed by both the nature and quality of the sound.

Northeast Minneapolis is hands down the most ethnic part of the city and a number of first generation immigrants still live there and are still arriving. I am biased, but I think it is by far the most vibrant part of what can often be a stolid, borderline boring, Scandanavian Lutheran and German city. On 4th St NE, bars alternate with churches, almost block for block. Roman Catholic, Eastern Orthodox, Russian Orthodox, and Lebanese Maronite churches are all in the area, many founded by a particular ethnic group. Grumpys was packed last night, especially with eleven musicians jammed into one end of the bar. RonO and I were in mourning about the premature demise of Summit's Winter Ale on tap; the Maibock (May bock) debuted on probably the coldest day of the year, a day when a good winter ale was essential to our health and well being. We sucked it up however, swallowed our grief (along with some tater tot hotdish) and switched over to Oatmeal Stout and Guiness. The music was wonderful, the mix of folks in the bar was really nice, and entire atmosphere was very warm on a very cold night. I tried to shoot a bit of video but with low light and a crappy camera the visuals are abyssmal. You can hear about 10 seconds of Lara's Theme from Doctor Zhivago however, arguably the most famous piece of balalaika music ever written. It was a very convivial evening, even though the Convivialist deserted us for a prior engagement. Grumpy's truly was the epitome of what a neighborhood bar should be during last nights event.