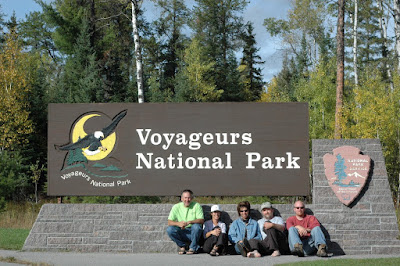 I'm sure many of you have been wondering, especially kayakers, which national parks you can exercise your right to pack your Glock, Beretta, or good old Colt .45ACP in. As of January 9 a holder of a concealed carry permit is allowed to carry a loaded gun in national parks located in right to carry states. This has already taken effect so no stroke of the pen by the Obama administration will make it go away, only long, boring, and contentious legislative and/or administrative haggling. Since it will certainly be in place for this upcoming paddle season, I feel its my civic duty, as a permit holder myself, to let you all know where you can be packin' as you paddle.

At this time Wisconsin and Illinois are the only states in the union that have no Right to Carry law of any sort on the books. Michigan and Minnesota do. This means that if a kayaker is heading to the Apostle Islands National Lakeshore in Wisconsin, they will be unable to defend themselves against stunted bears, predatory red squirrels, or people from Chicago. In Voyageurs National Park in Minnnesota, paddlers will be able to reach into their wetsuit, retrieve their 'piece', and send a hail of lead in the direction of anything that disturbs the wilderness experience. Its the same in Pictured Rocks National Lakeshore or Isle Royale National Park, very close to Minnesota yet, inexplicably, a part of Michigan. The border parks are much more problematic. The St Croix National Scenic Riverway basically consists of the St Croix River as it winds between Minnesota and Wisconsin on its way to meet the Mississippi near Hastings, MN. If a canoeist launches in Minnesota with the Smith & Wesson they are good to go. But if they cross that invisible line in the middle of the river they are in Class A misdemeanor territory. It could be even worse in Voyageurs NP. If a paddler wandered over the border into Canada, which is very easy to do in the maze of islands, you would be in serious felony territory. They really, really hate handguns in Canada.

I hope this helps the paddlers among you who have been yearning to carry a handgun to protect yourselves from the myriad of dangers that can pop up in a national park. As a concealed carry permit holder with reciprocity in Michigan, I would be perfectly legal carrying a handgun on my next paddle trip to any of the national parks in the region except AINL. In all seriousness now, I think I will pass on exercising that particular freedom. Its not because my shoulder holster would chafe under my tuliq, or fear that a heavy .45 automatic would drag me down if I capsized. Its just that I can't think of any good reason that I'd need to have a handgun on a paddle trip to a national park. Not one. Unless I was in grizzly country (in which case I'm woefully undergunned anyhow) I can't think of an animal that I'd need to protect myself from. My fellow homo sapiens are another story but we just don't get much lunacy in the national parks in the midwest. Sure, we had the redneck rampage up in the Boundary Waters Canoe Area Wilderness but I'm not sure whether more guns on the other side would have helped or exacerbated that situation. Certain areas of the country are plagued by human debris in public parks, as described by the disturbed and slightly unbalanced Lord Hayden from his trip to the Lake Oroville State Recreation Area in California. The parks I've visited around here just don't seem to have that level of decay.

Bottom line, I have no big problem with the ruling. I really don't see much of a difference in the park experience if a few people are wandering around with bulges in their pants (meaning concealed guns, of course). The people that take the training, submit to the background check, and fork over the money for the permit are rarely people that the public needs to worry about. Still, its a hot button issue and my guess is that the NRA and the Brady Campaign Against Gun Violence lobbyists will justify their existence by yelling, suing, defaming, and vilifying one another over the issue for years to come. Personally, I think I'll just go kayak.

I really couldn't think of a suitable gun/kayak picture so I thought I'd upload the violent video of the execution by firing squad of my worthless cell phone once again. It lifts my spirits every time I see it and I hope it does the same for the you. Enjoy

Given that NPS LE officers had the highest fatality rate of any branch of law enforcement before this idiotic ruling was made, I have a hunch Ranger Bob and others do have a problem with it. There are too many low I.Q. gun nuts running around now -- I see no reason to encourage them.

"This means that if a kayaker is heading to the Apostle Islands National Lakeshore in Wisconsin, they will be unable to defend themselves against stunted bears, predatory red squirrels, or people from Chicago."

Funny, some Chicago kayakers want to pack some heat to protect themselves from the Northlanders, who they/we view as the kind of folks who would be right at home in the movie Deliverance.

Excellent piece. Send it in to the newspaper. As for the cell phone: It was nice that you gave it a blind fold, but no cigarette?

Moderator, as a 'flatlander' from "The Cities",I agree with your comment. Tongue was firmly in cheek. I thought I heard banjo music in the background in a couple of situations 'up north'. Nan, I don't think the permit holders will be the problem; they are usually follow the rules folks. My limited midwestern NatPark experience would indicate its gonna be a non factor around here;not so sure in the other parks. Silbs,the thought crossed my mind but no one that I know smokes anymore!

Wish I didn't know anyone who smokes ... half the people I work with stink up the place with cigs.