We managed to get Podman and the KingOfIrowoodIsland on the big lake for their first pre May paddle ever. The group was rounded out by RonO, CribbageQueen (her first trip with this rough crew), and Yours Truly. The lure of coho salmon biting in the bay got the boys on the water, and in the King's case in the water, but in order to catch the light sensitive coho it's usually a good idea to be trolling slightly before the crack of 11am and that was just not the case on this outing. The waterfowl and weather more than made up for it though, and an early spring is creeping into the northland. 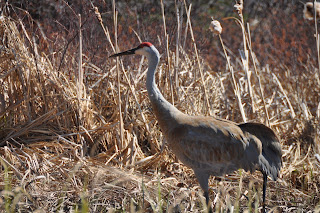 We launched from Bark Bay slough, a known bird haven as well as the spot where the gigantic Lake Superior northerns spawn. We immediately flushed a large flock of bufflehead ducks which wheeled over us and headed west.

The goose were honking pretty much continuously and a pair of common mergansers paddled out of our way, apparently realizing they really didn't need to fly to avoid us. Every corner that we rounded as the Bark River snaked its way to into Lake Superior's Bark Bay brought more waterfowl to see and hear. By far the most exciting discovery was two Sandhill cranes standing on a floating bog as we drifted by. They didn't seem too concerned by the kayaks and I got some very close shots. When they took off their squawking made the geese seem like they had been whispering. I didn't even have time to crank down the telephoto they were so close. 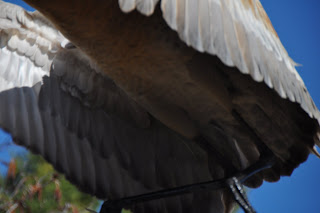 We left the slough and paddled into the bay, a view that always does my heart good. It almost reminds me of the scene in African Queen where Bogart and Hepburn were stuck in the marsh and all of a sudden it opened up into the huge lake. The last river bend is rounded and Roman's Point pops to the east and is framed by the two sand spits at the mouth of the Bark River. King Ironwood took this opportunity to capsize as he was landing for a comfort break before entering the big lake. His later comment, "my legs and feet are warm and my upper body is warm, but my ass is freezing" was classic.

We trolled all the way around the base of the horseshoe bay with only one lousy strike. We spoke with folks that had caught fish but they all had their success before the sun burned off the overcast. 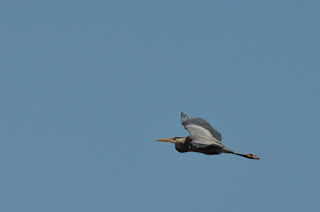 Coho or no Coho, it was a beautiful day for a paddle. After a quick beer and a sandwich we crossed the mouth of the bay, a short 3 mile paddle with a light tail wind, to the partially ice clad cliffs of Roman's Point. A lazy paddle down the lee side to another obscure state owned marshland, the Lost Creek Bog. The water was high enough to paddle in and once again the waterfowl, including the first Great Blue Heron I've spotted this season, were utilizing the area extensively. 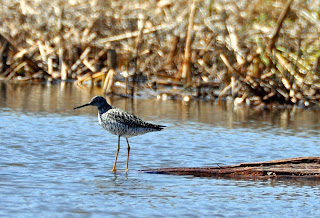 I also thought, as a fairly ignorant birder, that I'd captured an image of the rare Piping Plover but the GurneyGranny (an actual birder) told me it's actually the not rare at all Lesser Yellowlegs. Oh well.

The paddle ended at Cornucopia beach, one of the longest and prettiest sand beaches on Lake Superior. Not only was there a free flowing artesian well at the take out, but there was also RoyM, with his multiple piece Greenland sticks. The other thing within easy striking distance was the Village Inn with its inviting pitchers of South Shore Nut Brown Ale, the perfect end to another surpisingly perfect early season paddle on Gitchee Gumee. 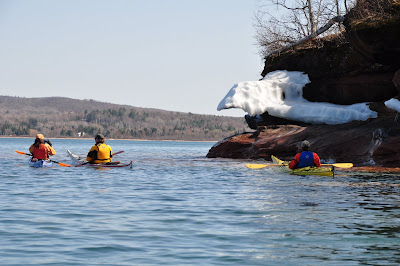 We are all confident that the 'other shoe' will be dropping at some point. The lake certainly won't allow this bluebird weather for much longer. We will take full advantage of it while it lasts however. Its just way too rare and way too inviting to miss.
Posted by DaveO at 7:38 AM

Great photos. A pair of sandhills nests on our property in the UP most summers. They are remarkably noisy birds.

Nice shots! I have a feeling there are a few other nicknames for me but those weren't printable for our family readers so the CribQ will do. It was a great day on the water! Thanks for sharing.

I enjoyed the visit.....see You next time if it times out right