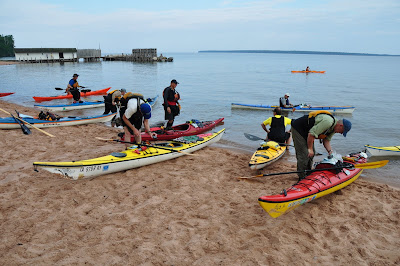 As I mentioned in yesterdays post, our Tri State (IA, MN, NE) Apostles expedition got off to an unexpected start when a line of thunderstorms appeared to be heading in our direction on Saturday afternoon. I was at Red Cliff with my boat loaded, heading up to the casino to pay my launch fee, when I got a call from DocL. The crew had made it about 100 yds off shore when ProfLichen heard the thunderstom alert on the radio. They paddled back to LSB, looked at the radar in the ranger station, and decided to wait. By the time I showed up it was 3pm and the 16 mile hump to Quarry Bay on Stockton seemed like quite a stretch before dark and we would have to make supper and set up camp as well. We booked a couple sites at the Town of Russell and I drew upon local knowledge to steer the group to the Village Inn in Cornucopia for incredibly fresh grilled whitefish and the equally fresh South Shore Nut Brown Ale. 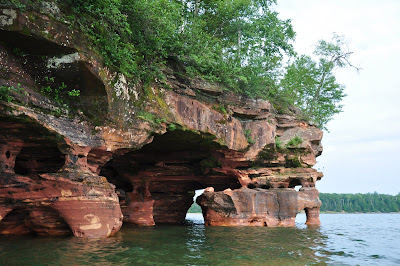 The go vs. stay put discussion is always interesting, even more so with 9 personalities and skill levels in the group. The basic concept is the 'weakest link' rule. If someone in the party does not want to go and feels uncomfortable, the group stays put. In reality peer group pressure can alter this dynamic and strong personalities can influence the others with the 'oh hell, lets give it a shot'mentality. Also, if a person feels uncomfortable speaking up or doesn't want to hold the group back it can result in trouble if and when the defecation hits the rotation on the water. Given the collective experience of the paddling group, their experience with the big lake, and the lack of any shrinking violets in the group, I have to believe the decision was arrived at in a thoughtful, rational, and collective fashion. 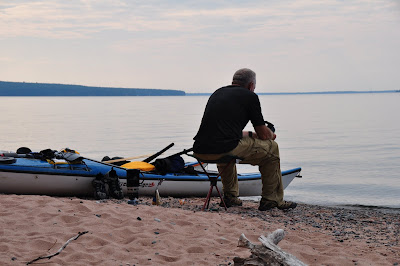 Back to me, strolling into the casino with a twenty dollar bill in my hand, still in street clothes but with my boat fully packed and ready to rock at the marina beach. I'm assuming I'll rendezvous with the group in the Basswood Triangle, probably off the southeast tip of Oak Island. The forecast that I heard called for a line of thunderstorms, mainly to the south of the lake, with thirty mph wind gusts. Unlike the NOAA report we heard on the 4th of July, there were no reports of trees down, cloud to ground lightning, or a storm plot that named towns in the path that had been or were going to be hit. I was geared up for solo paddling with safety gear, radio, shorty wetsuit (water temp was 69F), route plan with several bail points including Basswood, Hermit, maybe Oak, and no crossing longer than about 45 minutes. Four other folks were setting out and we chatted about the forecast and possible routes. I had pretty much decided to go when Doc's call came in. 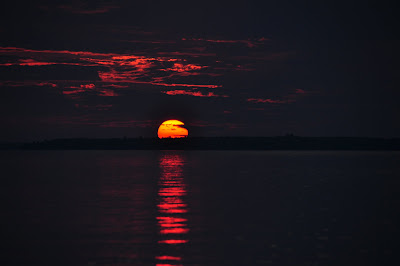 More input is good most of the time in the decision making process. I quickly unloaded the boat and headed over to LSB. We had a fine time and an even better paddle the next morning. A trip to the Sand Island sea caves on Swallow Point, crossings to York and Raspberry where the light was toured, and then over to Oak. We were disappointed to not have made it to Quarry Bay but that was quickly forgotten as the paddles hit Gitchee Gumee on Sunday morning. Half of us were at Oak 4 and the others at Oak 6. I don't know how the evening went for the guys on 6 but the sunset on 4 made it well worth the price of admission. It was fun to hear that a couple of paddlers new to Lake Superior had crested the hill in Duluth on the way up, looked at the vast expanse of lake, and commented, "And we're going to paddle in that!?". In the end not making it to Quarry Bay did not make one whit of difference in the overall scheme of things. Which is how we need to look at that paddle or no paddle decision. There are always alternatives and in the end things seem to work out. Those with the gung ho mindset need to remember that or risk having "the waves turn the minutes to hours" if they choose incorrectly.