One of the Canoecopia events that GalwayGuy, RonO, and I were anticipating was Dubside's first trip to Wisconsin. We all paddle mainly with Greenland sticks and it seemed like whenever we stopped going forward this summer we were upside down. I invested in Dubside's Greenland rolling video and we were anxious to see the man in person. On Saturday we almost didn't make it. The line snaked out the door of the pool and down the hallway and being early for events is not something I'm famous for. Fortunately we snuck in by the skin of our teeth and were able to watch the demo along with a capacity crowd. 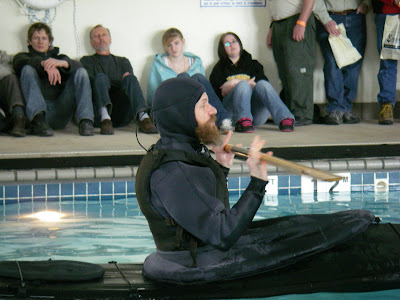 Dubside is a smaller guy than I'd envisioned, probably 5'8" or so. He is very limber and claims that if you could improve your paddling with one word, that word would be yoga. Flexibility seems to be the key to successful rolling. He never came close to missing a roll in his demo and this included rolling with a brick in each hand and also passing a lit candle over the hull of his boat while inverted and then hand rolling back up, candle still lit. I've always thought that a good rolling boat would help me and to a certain extent I think it would. The VOR's Avocet seems to come around effortlessly compared to my Aquanaut HV, which I affectionately refer to as the ore freighter. Watching Dubside's video however, makes it apparent that technique and flexibility are the key. When he straps himself into a large unwieldy sit on top and rolls the damn thing first try the point is driven home. 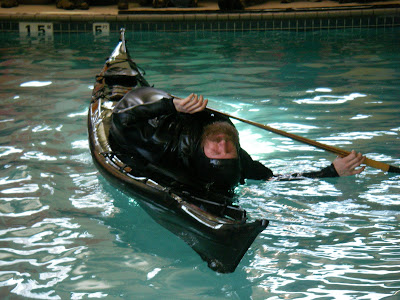 After watching his demo I also checked out his boat very carefully. He paddles a Feathercraft Wisper with a very low stern deck and thigh braces. Viewing abovementioned video a few months caused me to call Feathercraft and spring for bracing bars and a rolling rib. I have yet to try them, given my well known aversion to immersing me or my gear in chlorine. I emailed Reed Chillcheater right after the lakes froze, inquiring about the effects of chlorine on my beloved tuliq. Jo Reed responded and told me that repeated pool usage would cut the effective life in half. After that tidbit said tuliq or Feathercraft Big Kahuna will never see chlorine again! I gave Dubside a hand hauling his boat into a room set aside for that purpose after the demo. I asked him how he kept the foot pegs on his boat from 'drooping'. He explained that I needed to drill a hole in the pegs and run a line up to the gunwhales of the boat. Now why the hell didn't I think of that a couple years ago instead of attempting to contort my big toe under the offending peg to flip it back up? He also showed me the new rig in the Wisper, which is a flexible bar that you put your feet on. When I asked him about the visible protrusion in the bottom of his boat was when he rolled he told us, "My feet". Now thats solid bracing. I also noticed that he had his sponsons inflated all the way. When Bonnie (our favorite river rat) asked about rolling a Khats (actually not rolling it) I suggested she cheat and deflate the sponsons. She did so and said it made rolling much easier and planned on slowly inflating them as she figured the boat out. The Feathercraft are rock solid with the sponsons inflated, as TheMayor discovered when we were rounding Hat Point near Grand Portage on Lake Superior in some nasty clapotis. I can't wait to get my Kahuna retrofitted and into the soon to be icy albeit liquid waters of one of our local inland lakes. 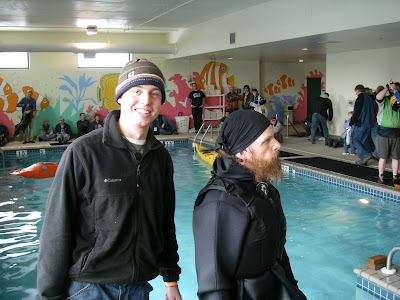 It was a great demo and especially pertinent to those of us who are struggling with the diabolical norsaq stick and various butterfly and shotgun rolls. As we watched Dubside go through his rolling repitoire Silbs and I exchanged comments like "thats just wrong!" and "yeah, SO wrong!" as we felt both admiration and envy for what this guy has accomplished. And GalwayGuy was more than happy to get a photo op with our diminutive fellow Greenland fan from Seattle.
Posted by DaveO at 9:52 PM

I swear (I am holding my right hand up) that I didn't see this until after posting my Tuesday blog. We need to tell the readers that our pictures are similar since we were sitting next to one another. It really was a great demo. Too bad only 100 of us could get in.

I did mention our incredulous comments near the end of the post. I think your prophetic, "Monday will be the most boring blog day ever" after the blogger picture was shot could come to pass. Dubside was well worth a couple posts however.

I love Dubside's modified Wisper. It's such a phenominal rolling kayak that it's ridiculous. It's even more of a cheater than my Yost folder! Granted Dubside could do most of those rolls in most any kayak with the exception of the hardest 2 or 3 rolls.

Awww, thanks. Actually, I'd said "non-Khats" when I was asking you for advice -
K-1 is what I was actually rolling - the one at the end of this post.

Sponson thing worked for that one, too!

I've only been in a Khatsalano once, and that was before the days when I was rolling with any confidence (I had a shoulder pop out of joint the first time I tried to roll a sea kayak & I got the roll back a long time before I got the confidence back). I'm told they actually roll just as well as any other sea kayak, though.

Now I'm impressed. The Khats is kind of a Greenland style boat but the K-1 is pure expedition cruiser. You can pack a ton of gear in those things and when the sponsons are inflated they must be rock solid. The problem with that, of course, is the they want to stay upside down just as badly as they want to stay upright.